Engineering staff all fully compliant to BSRIA BG29/2021 “Pre-commission cleaning of pipework systems” and are trained in the science and philosophy of chemical treatments and microbiological control and prevention. Ph Water Technologies Limited staff were instrumental in the collation of information for the BSRIA guide and steering group members for the manual.

Newly installed closed systems, LTHW, MTHW, HTHW, Chilled Water and Condenser Water circuits should generally be pre-commission cleaned. The vast majority of these systems have small bore control valves, regulating valves etc, which readily become blocked with particulate matter and would then fail to operate. It is therefore important to ensure the presence of acceptable water quality prior to putting the system into use. Debris and contamination that is present in a system as a result of the installation process needs to be removed.

Cleaning systems prior to an initial balance is very important. Preceding the balance all valves can be fully opened and flushing flows maximised and manipulated to ensure that all possible debris is removed from the pipework. It is rare that such an opportunity will present itself again since once a building is commissioned and occupied, regulating valves in the system will be at a set position with reduced orifice sizes to effect a system proportional balance. The use of chemical enhances the cleaning process by removing soluble contaminants.

BSRIA BG29/2021’Pre-commission Cleaning of Pipework Systems’ outlines the methodology for cleaning new industrial and commercial systems (BS7593 2006 for domestic hot water central heating systems). In addition this guidance document outlines the responsibilities of designers and installing contractors. These should be taken seriously since poorly designed systems cannot be adequately cleaned and systems installed without correct flushing facilities require additional installation work prior to flushing and cleaning.

It is important to get systems properly cleaned in accordance with the guideline. In the event that the process fails subsequent cleaning becomes more difficult for the following reasons:

We strongly recommend that pre-commission cleaning works are fully recorded and witnessed and that samples are taken to demonstrate cleanliness on completion. In addition we recommend that samples are taken at practical completion on a building site contract to demonstrate compliance with the specification for the new building.

Witnessing cleaning of a strainer after a pre-commission flush

Following pre- commission cleaning it is important that closed systems are carefully monitored and regularly maintained. This maintenance should continue throughout the life of the building and should involve sample taking at a maximum interval of 3 months.

To obtain the maximum benefit from a system and to ensure longevity and ability to work as installed new systems and pipework need to be thoroughly cleaned to remove debris, such as sand, welding ash, corrosion deposits, grease and oil-base agents.

ph Water Technologies fully trained engineers will apply and monitor these cleaning programmes which have been specially designed to be compliant with BSRIA guidelines.

ph Water Technologies fully trained engineers will apply and monitor these cleaning programmes which have been specially designed to be compliant with BSRIA guidelines.

ph Water & Air Technologies are happy to offer solutions which include specific chemicals for the water quality and contaminants detected. We can support these with assistance during design, during filling & testing, the use of filtration, temporary pumping facilities, dosing solutions, plant & equipment. 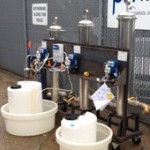 Pseudomonas bacteria has the ability to cause corrosion to any open or closed water system. Once the bacteria is established it forms a jelly like film which clogs valves and reduces heat transfer. The anaerobic conditions created between this film and pipe work provide a breeding environment for other bacteria including SRB’s and NRB’s. It also creates a barrier to debris preventing a successful chemical clean if not treated properly.

As it is a living organism it will reappear if not completely destroyed. The results of pseudomonas within the system are often shown by changing commissioning results, greasy films on strainers and often as muddy reddy brown colouring to the water. In simple terms these have been linked to corrosion.

This is one of the most destructive groups of biological foulants because they cause corrosion resulting in severe localised pitting of pipework surfaces. They have been implicated in severe corrosion problems for copper, iron, steel and aluminium pipe work. As a result of their metabolism, they produce hydrogen sulphide which attacks iron and steel and forms the end of produce ferrous sulphide. Steel thus becomes pitted, and cast iron becomes ‘graphitised’.

This bacteria gasses to produce ammonia. This poses a risk of stress corrosion cracking to brass/copper components such as valves and fittings. As with SRBs above these are anaerobic bacteria which tend to produce acid (corrosive) by-products. These as with SRBs dwell beneath deposits or in systems with limited oxygen. In the event that NRB’s are detected in the absence of a

N.B. Low/Medium NRB levels detected in isolation of any other Heterotrophic plate count is unlikely to be of concern and system(s) will be deemed under microbiological control.

The Total amount of bacteria expressed in colony forming units. High levels are often an indication of a dirty system. The dirt providing a hide out for the bacteria and ideal breeding conditions.

Insoluble dispersed solids which may be separated from the water by filtration or sedimentation. These should be <30mg/l at circulating pump sets, which allows for the fact that corrosion inhibitor will cause an increase. At all other parts of the system these are expressed as ‘settled solids’ and should be <45mg/l on immediate completion of any water treatment works.

Expresses the acid or alkalinity of a sample. Important test when known certain installation & plant materials have been used.

*Settled solids refers to the insoluble material flushed from a terminal unit or defined length of pipe at the maximum available flow rate with the drain point fully open. The total volume of discharge should not be more than the volume of the terminal unit or the defined length of pipe. The sample container must be shaken to disperse the solids before filtration fro gravimetric analysis and the result is reported as milligrams per litre. A laboratory should be instructed to analyse and report the sample as suspended solids. For further information refer to BS 9552.

** If these are present as material in the system

*if these are present as materials in the system

The guidelines in Table 6 are for the overall state of the system and should be applied to the geometric means of sets of microbiological results ( calculated a described in appendix A).

In Table 6, column “M” indicates parameters for 2-weekly monitoring and column “PC” indicates parameters to be evaluated at practical completion. “M” results are provided for information and interpretation by the cleaning specialist so that the remedial actions may be recommended where appropriate, and for establishing trends prior to PC.

The recommended test for the sulphate reducing bacteria takes 21 days. A system may be accepted for practical completion before the test result is available provided there are no prior positive results or these have been prior positive results but remedial action has been completed. Should a positive test result be returned after practical completion then the specialist will advise on whether further treatment needs to be carried out depending on the extent of infection.

Dip slides and membrane filter ATP analysis may be used to supplement the minimum required analyses and as investigating tools. But the results should not be used to assess the condition of the system against practical completion guidelines.

Table 7 indicates how the microbiological results should be interpreted. The “system result” is the geometric mean of all results for the specified parameter. The pre-commission cleaning guidelines from Table 4 are 10,000 cfu/ml TVC and 1000 cfu/100 ml pseudomonads. Examples of the assessment process are given in Appendix B.

Table 7: Interpretation of TVC and pseudomonad results for practical completion (if within 3 months of completion of pre-commission cleaning)

“No increasing trend” means that the current system result is not greater than the geometric mean of the previous two-system results.

If practical completion is more than 3 months after pre- commission cleaning the trend is established from linear regression of the logarithmic values of the last five system results. Any limits to acceptable bacteria concentrations are established by agreement between the cleaning specialist and client.

The evaluation of results is discussed in more detail in Appendix B and BS 8552.